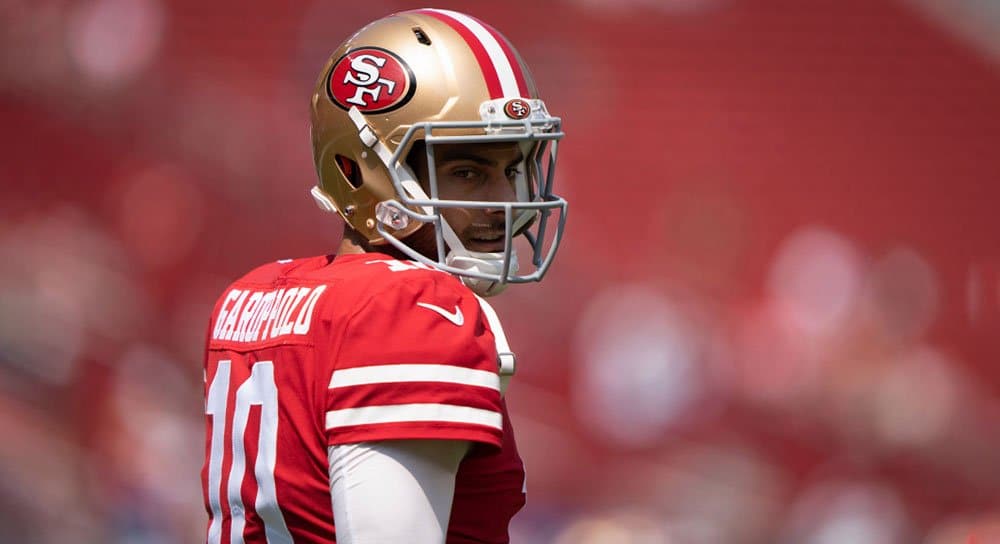 If you’re interested in fantasy football, you should consider entering the NFL Sunday Million contest at FanDuel. Over $3.5 million bucks will be given out in cash prizes and the first place winner earns $1 million! You can’t beat the low entry fee either, which is only $3.

If you are new to DFS, you may want some pointers when setting up your lineup. In this article, we’ll share with you our NFL Sunday Million lineup. Feel free to use this info as you see fit but do your own research.

For those that may have missed our PrizePicks Week 1 article, check it out for some actionable advice for Week 1 prop-format fantasy contests.

Jimmy G has said all the right things when folks have asked his thoughts of the QB competition between him and Trey Lance. Secretly though, we know that Garoppolo has to be piping mad that he’s having to fight for his starting job. Though he’s struggled with injury issues, Garoppolo has a career record of 24-8 as a starting QB in the NFL.

We expect Jimmy G to come out with a chip on his shoulder in Week 1 against a putrid Detroit Lions defense! Remember, the Lions ranked 30th in the league against the pass in 2020 (284.9 passing yards allowed per game). Garoppolo should have a field day by finding Deebo Samuel and George Kittle for several big plays. Coach Shanahan may have a few packages for Lance to play in, but this is still Garoppolo’s team.

Gibson quietly put together a phenomenal rookie season in 2020. The former Memphis standout rushed for 795 yards and 11 touchdowns for the Washington Football Team. Gibson is a big guy (6-2, 220) who can run over defenders, but he’s also got good hands to help out in the passing game.

Gibson caught 36 passes for 247 yards a year ago and those numbers should improve with a veteran QB like Ryan Fitzpatrick coming in this year. The Chargers were decent against the run last year but they definitely were not an elite rush defense. Expect a big day from Gibson as Ron Rivera loves to pound the rock.

This is a cheap price for a guy like Damien Harris, who has quietly waited his turn to be an impact player in Josh McDaniels’ offense. The former Alabama star showed flashes of brilliance in 2020, as evidenced by his 5 yards per carry average.

Harris may have to split some carries with veteran James White but don’t let that deter you from selecting him. This is Harris’s chance to make a name for himself and we expect him to do so in Week 1, even against a decent Dolphins defense.

The Bengals first-round pick, Ja’Marr Chase, is getting a ton of hype, and deservedly so. However, we are more excited about Tee Higgins and his ability to stretch defenses. Higgins had a solid rookie campaign last season by catching 67 passes for 908 yards and six touchdowns. Joe Burrow appears to be fully healthy so Higgins should get plenty of opportunities against a below-average Vikings secondary.

Here’s another value pick at the wideout position! Christian Kirk should have a huge day against the Titans’ horrible secondary. Tennessee ranked 29th in the NFL in pass defense a season ago and we don’t see them improving much in 2021.

Kyler Murry is maturing as an NFL QB and we expect him to hook up with Kirk lots of times in Week 1. We envision a lot of points in this Arizona vs. Tennessee matchup so that works in our favor here as well.

Will the Texans stink this year? Absolutely! However, Houston still has plenty of talented players on the roster. Cooks is one of those guys. The word is Deshaun Watson will be traded soon, so it will probably be Tyrod Taylor looking for Cooks on deep post patterns. The Jags’ secondary is terrible so Cooks could put up some nice stats against them in Week 1.

Smith only started seven games in 2020 but he still put up a decent stat line (30 catches, 365 yards, 5 touchdowns). We expect Smith to have a breakout season for the Vikings and it’ll start in Week 1 against a bad Bengals defense. The former Alabama star is 6-2 242 pounds and runs faster than some wide receivers! Kirk Cousins should be looking for this guy on play-action passes down around the goal line.

Sometimes the chalk play is the right play! McCaffrey is the most expensive player on the board but the price is justified. The former Stanford star should be raring to go in 2021 after only playing in three games last year due to injury.

The 2019 All-Pro is a fantasy owner’s dream because of his ability to catch lots of passes. We look for McCaffrey to torch this Jets defense in a variety of ways!

The Niners were decimated by injuries last year but all the key pieces are back for 2021. Defensive end Nick Bosa is finally healthy and he could sack poor Lions QB Jarod Goff multiple times in Week 1.

Even with last year’s injuries, San Fran still ranked seventh against the run (106.4 rushing yards allowed per game). We look for the 49ers’ defensive line to shut down the Lions’ running game and pressure Goff into several turnovers.