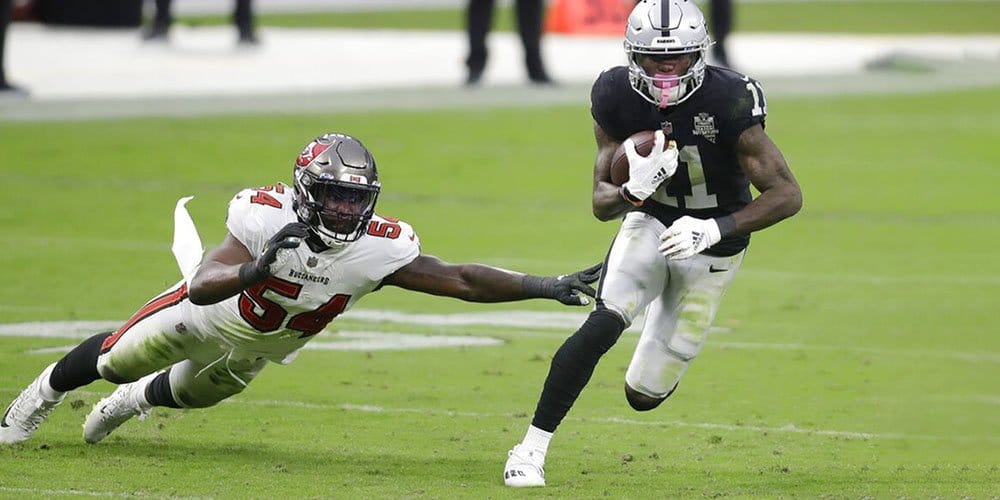 The wide receiver position is our favorite spot to find sleepers. No position is deeper than wide receiver, which means you can build depth on your roster towards the end of your fantasy draft.

That being said, targeting the right sleeper wide receivers in rounds 10 and on can be the difference between winning and losing your league. This is particularly if you are planning on finding your WR3-WR5 in this part of the draft.

Here are our five favorite receivers that are available in round 10 or later at their current ADP (120+).

This pick is sure to ruffle just about everyone's feathers. From being a part of the super-team Brady is assembling in Tampa, to the disaster that was 2019 (and the first half of 2020), Antonio Brown has few remaining fans in the fantasy world.

That being said, he did return from a 1.5-year hiatus and immediately produce for the Bucs last season. In fact, he was the team's best fantasy receiver down the stretch, averaging just under 21 FPPG over their last three games.

While he clearly will never be the guy that finished in the top-4 in fantasy scoring every year from 2013-2018, we feel confident AB has at least one more year in him.

Regardless of whether or not he is actually the WR3 on this roster heading into the 2021 season, AB is better than his current WR44 ADP. He finished last season as WR27 in FPPG and missed half of the season!

Ruggs' rookie season gave fantasy owners plenty of reasons to pause before drafting him in 2021. After putting up 66 yards in his first career game, Ruggs sustained an injury in week two before returning and putting up 118 yards and a touchdown against the Chiefs in week 5.

Unfortunately, that would turn out to be the highlight of his rookie campaign with Gruden and the Raiders staff electing to use him more as a decoy. Ruggs would end the season with an ADOT of over 17 yards, which made it nearly impossible for him to find any consistency.

The Raiders staff has said throughout this offseason that they will do a better job of getting him the ball closer to the line of scrimmage and they likely have to with Agholor and his 82 targets now in New England. It is also worth pointing out that Ruggs himself should be more prepared coming into year one... he is still just 22 years old and lost the last offseason to Covid.

If Ruggs can find a way to get to eve 80 targets this season he should be a lock to finish as a top 30 fantasy wide receiver. With a current ADP of 143, he is being drafted just outside of the top 50 wide receivers at the moment. Few players in this range have his upside.

Reagor finds himself in a very similar to Ruggs entering year two. Entering the season with a ton of hype, Reagor sustained early injuries and never found his footing as a rookie.

With the team adding Devonta Smith this offseason, many are ready to write off Reagor ahead of his sophomore campaign, but we think the Smith addition is just what he needed. Not only does it provide Reagor with some room to operate but it should drive him to compete for targets as he is no longer the 1st round savior WR in Philly.

Perhaps the biggest difference Smith's arrival brings is the opportunity for Reagor to work out of the slot. This gets him closer to Jalen Hurts, puts him in better matchups, and should lead to more targets.

If fantasy owners weren't ready to write him off after his disappointing rookie season, failing his conditioning test likely put them over the edge. However, it took less than a week for reports of him shredding the Eagles secondary to start coming out of Philadelphia. Buy low on Reagor as a nice sleeper pick in the 12th round of your league's draft.

Elijah Moore seems to be cut out of the perfect mold for an overhyped rookie wide receiver. A small, quick slot receiver that knows how to get open, catches everything and had a ton of production in the SEC.

However, for whatever reason, the fantasy community just is not taking the bait here and we think they are wrong. A wide receiver like Moore is exactly what a rookie QB like Zach Wilson needs. He's always open, will almost always be targeted inside of the numbers, and can't take a short pass the distance.

We see zero upside in some of the names going before him (John Brown, Tre'Quan Smith, Sterling Shepard...) and would much rather throw a dart at a young receiver, in an ascending situation, before dusting off a veteran buried on a depth chart somewhere.

As of August 10th, Moore is available in the back half of round 15 of 12 team fantasy drafts. At that point, it is all about upside and potential. Roll the dice on Moore as a sleeper and hope that either Wilson works out, or the Jets are so bad they are playing from behind for three-quarters of every game.

With the fantasy community avoiding the Detroit passing attack like the plague, we see value in a guy like Perriman that has proven he can produce at the NFL level when healthy.

Even last season, despite being stuck in an awful situation in New York with both QB and HC on their way out... despite another early injury... despite entering week six with only 29 receiving yards... Perriman found a way to get to 500 receiving yards and 3 touchdowns on only 30 receptions.

Let us also not forget that this guy ripped off 600+ yards and five touchdowns in the final five weeks of 2019.

Is Anthony Lynn worse than Adam Gase? Justin Herbert would argue not. Is Jared Goff worse than Sam Darnold? A Rams NFC Championship would argue not. Additionally, the Lions have quietly put together one of the best offensive lines in football. A must-have for a guy like Perriman who does most of his damage down the field.

Currently available in round 16 of 12 team drafts, Perriman is another sleeper WR with big-time upside in 2021. Take him as a late-round flier and if he doesn't catch fire in the first few weeks make him your first drop.