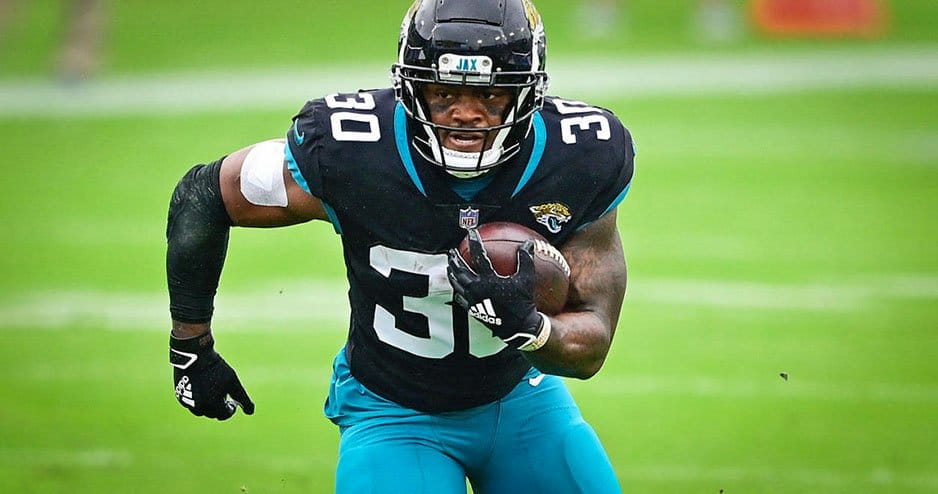 Published by Chris Lollis on September 2, 2021

All of the superstar running backs get the majority of the headlines so it takes a bit of digging to find some sleepers of any substantial value. In this article, we’ve done some of that research for you to save you some time. Here are six sleeper picks for the running back position.

Melvin Gordon will probably win the starting RB job in Denver to start the 2021 season. However, don’t be surprised if Williams works his way into the starting lineup by the middle of the season. Did you see this kid run the ball while he was in college at North Carolina? He’s a legitimate stud!

Williams has ideal RB size (5-10 220 pounds) and 4.5 speed. Teddy Bridgewater was recently named the Broncos starting QB. That makes us love Williams even more because Bridgewater is notorious for constantly making the smart check-down throws to his safety valve out of the backfield.

If Williams is available in the later rounds of your fantasy draft, it would be a wise move to put him on your roster!

It’s hard to believe that Jacobs could be considered a sleeper pick, especially since he’s coming off a splendid 2020 season that saw him score 12 touchdowns and rush for 1,065 yards. However, most fantasy owners are overreacting to the Raiders signing of Kenyan Drake. Drake may hurt Jacobs’ receiving numbers a little bit, but it’s nothing to be alarmed about.

Drake may get a fair share of work this season, especially on third-down passing situations. However, we still expect Jacobs to be the bell cow of the Raiders running game this year. Jacobs should also enjoy running behind his former Alabama teammate, Alex Leatherwood, who is an excellent run blocker.

You should be able to pick up Jacobs in the mid to later rounds of your fantasy draft. Even with Drake getting some touches, we could see Jacobs still reaching both the 1,000 yard and 10 touchdown plateaus in 2021.

Dillon is the perfect RB sleeper, especially since the Packers decided to re-sign Aaron Jones during the offseason. Jones is a heck of a tailback, but we expect Dillon’s role in the Green Bay offense to expand a bit in 2021. The former Boston College superstar showed lots of promise last season by averaging 5.3 yards per carry.

We also love that Dillon is a big, bruising running back! Have you seen this kid? He’s 6-foot and nearly 250 pounds and has legs that are bigger than most pro bodybuilders. No wonder Dillon’s teammates call him Quadzilla!

Jones is a dynamic playmaker but he’s nowhere near Dillon’s size. This means that Dillon should get plenty of TD opportunities when the Pack’s offense is near the goal line! If Dillon is available in the later rounds of your fantasy draft, consider picking him up.

The unfortunate Lisfranc injury to Travis Etienne moves Robinson up to the starting RB spot in Jacksonville. Robinson was a wonderful fantasy sleeper pick in 2020 and we expect him to perform similarly in 2021. Since he plays on the woeful Jags, we don’t expect him to be drafted until the later rounds in most fantasy leagues.

Robinson came out of virtual obscurity last season to rush for 1,070 yards and seven touchdowns! The former Illinois State star also caught three touchdowns to further enhance his fantasy value. Savvy fantasy football owners love a running back who can both run and catch the football.

Trevor Lawrence is a definite upgrade at QB but the Jags offensive line should still stink. This means that Lawrence will be running for his life and will hit Robinson on several screens and swing passes. Expect another banner year for Robinson as far as his fantasy stat line is concerned.

Michel has to be elated to finally get out of the New England Patriots’ overcrowded backfield. Though it seems like he’s been in the league forever, Michel is still only 26 years old with plenty of tread left on the tires. Michel has the potential to put up some nice numbers in Sean McVay’s offense this season.

The former Georgia Bulldog only appeared in nine games in 2020 but did average 5.7 yards per carry, which shows that he’s still very explosive. Michel has also proven to be an above-average pass catcher in his career when given the opportunity.

Though Darrell Henderson will probably win the starting RB job, we expect Michel to get plenty of touches. Remember, Rams head coach Sean McVay loves to play multiple running backs and he also loves to ride the hot hand. Also, keep in mind that Henderson is coming off a thumb injury, so Michel may get more carries than expected in the early weeks of the season.

Edwards’ fantasy value has skyrocketed since JK Dobbins suffered a gruesome knee injury last weekend. With Dobbins out for the year, expect Edwards to have an even bigger season than he did a year ago.

In 2020, Edwards found the end zone six times and ran for 723 yards in part-time duty behind Dobbins. As the feature running back for the Ravens this year, just imagine how much those numbers will improve! Heck, those stats could easily double in 2021!

Expect Edwards to make lots of big plays for the Ravens’ offense, especially on the zone read plays that Lamar Jackson loves to run. Even with the Dobbins injury news, you should still be able to pick Edwards up in the later rounds since he’s not yet a household name.